Look at the weirdos 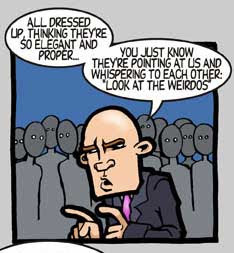 Don't expect me to get in the habit of this regular posting nonsense, but I couldn't pass up pointing out today's Commissioned.

Commissioned is often about RPGs, especially table top D&D stuff. There are a few rotating storylines dealing with different campaigns, as well as comics about O and his friends. I've only seen O in the role of DM in the comics and some of the humor comes from his experiences butting heads with the people playing the games he's set up, including how he will comeup with backstory and motivation for an NPC, and the players will just kill the NPC because they're bloodthirsty and that's how they roll (oh lord, how many times has that joke been used!!! I'm so sorry! Good thing Commissioned has better ones.). And he often pokes fun at how real life doesn't translate over into the world of the game, and vice versa. So after I read this, I had a "duh" momement. Of course, the guy who writes NPCs is going to think that other people don't just exist to people the world he or his characters live in. Of course they're going to have quirks and whatnot. It all fits together!

Also, O has drawn quite enough men (well, Carlos, and uh, Carlos and OH GOD CARLOS) in "special" underwear that this comic immediately gives me the visual, even though I happily only seeing a man in a suit. O is evil.

This is a comic you should be reading, even if you're not a tabletop gamer of any sort. O has a really cool cartoony style that's obviously scaled back from his full capabilities, and so is really crisp and elastic. Oh, and it's funny and gorey and wrong, which are a few of my favorite things.

And yes, I play Dungeons and Dragons. I played a little in high school and now we've got two different games going on with our housemates. So you can point and whisper about me and rest assured I'm doing the same to you. <3
Posted by megs at Thursday, January 18, 2007

Megs is a long time webcomics creator and, well, person who writes stuff. This is what she does when not writing about webcomics: